A Closer Look at Anti-Inflammatory Drugs vs. Delta-5 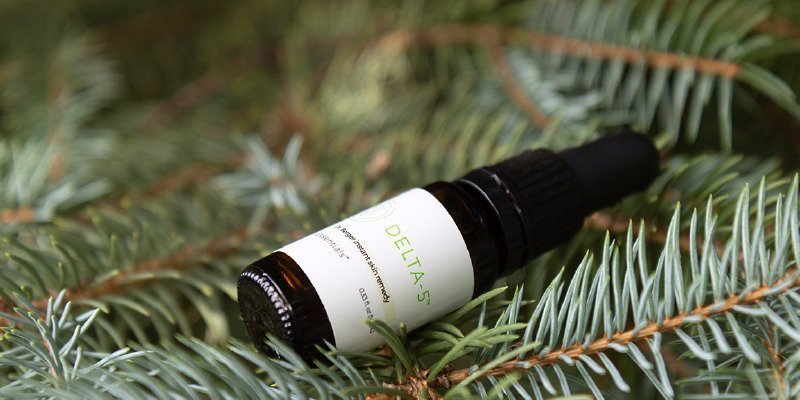 In a previous technical blog post from Dr. Berger’s corner, we reviewed the inflammatory cycle and its role in chronic skin problems. Link. We explained the difference between acute and chronic inflammation and mentioned that Delta-5 oils curb inflammation by displacing pro-inflammatory arachidonic acid (ARA) in specific phospholipid pools. Let’s dig deeper. 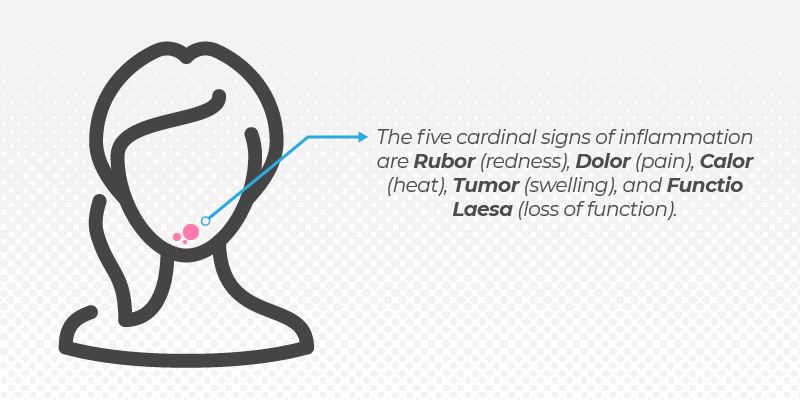 The five cardinal signs of inflammation are Rubor (redness), Dolor (pain), Calor (heat), Tumor (swelling), and Functio Laesa (loss of function). Show cartoon picture. Why the Latin you ask? These classical signs of inflammation have been known since the 1st century AD by the Roman medical writer Aulus Cornelius Celsus, when Latin was the spoken language. Each of these physiological responses is mediated by signaling molecules, released from specific cells. For example, pain may be mediated by the molecule Bradykinin; heat and swelling by the molecules histamine, serotonin, and bradykinin; Ref.

The molecules above, and many others, are themselves acted upon by other molecules, or lead to the release of other molecules, in what is termed a “signaling cascade”. For example, bradykinin may induce release of the pro-inflammatory fatty acid ARA from specific phospholipid pools (via enzymes known as phospholipase A2, sn-1 diacylglycerol lipase, and monoglycerol lipase). The ARA then becomes a substrate (precursor) to form pro-inflammatory molecules known as eicosanoids (“eicosa”, from the latin “20” because the first eicosanoids discovered were from 20 carbon molecules, although today it is recognized that any fatty acid with 18 carbons and two or more double bonds can serve as precursors).  Bradykinin may also release intact pro-inflammatory eicosanoids, independent of ARA acting as a precursor. Yikes, this is getting complicated. But the important point is that inflammation is largely mediated by eicosanoid molecules from fatty acid precursors in the skin and many other tissues. Eicosanoids may be responsible for initiating an inflammatory response to an acute inflammatory insult (say a cut), and without these acute responses, we would die. Following the acute response, the inflammation must be resolved (stopped), by a class of eicosanoids known as resolvins. It is the inability to resolve the acute inflammatory response that can lead to chronic inflammation. 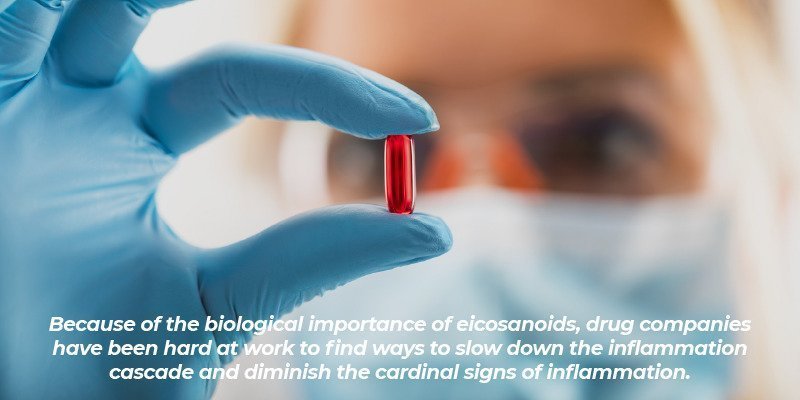 Eicosanoids are important for mediating inflammation, and they also have many other positive roles. For example, the eicosanoid known as prostaglandin E2 induces contractions of the smooth muscle cells of the uterus, leading to uterine contractions during childbirth. Because of the biological importance of eicosanoids, drug companies have been hard at work to find ways to slow down the inflammation cascade and diminish the cardinal signs of inflammation.  A process such as calor likely evolved as a means to kill pathogens (think of colds and flu here). Thus, taking a pill to diminish mild fever for your comfort might actually prolong the infection. The most common means to reduce eicosanoids using drugs is to reduce their formation from ARA. ARA is converted to eicosanoids via enzymes such as cyclooxygenase (COX), lipoxygenase (LOX), epoxygenase, and others, so drugs have been developed to inhibit these enzymes. Aspirin (acetylsalicylic acid) and plants containing natural salicylates, are molecules that inhibit COX (COX-1 and COX-2) and downstream pro-inflammatory prostaglandins such as Prostaglandin E2 (PGE2). Natural sources of salicylic acid have been known since 3000 BC in willow, and acetylsalicylic acid was coined “Aspirin” in 1899. Reference. So, drugs are a great way to combat chronic inflammation by reducing the formation of pro-inflammatory eicosanoids, right? Yes, but these classes of drugs have several major limitations:

So, drugs inhibiting eicosanoid formation from ARA are not the panacea we hoped for in inhibiting chronic inflammation. Could there be a more natural, safer, and effective way. It is well known that consuming fatty acids, or applying them to the skin, can decrease levels of ARA itself. Reference. There are claims that consuming certain fatty acids orally can benefit the skin (so called “Beauty from Within”), but formal clinical evidence is still lacking in our estimation. By targeting levels of ARA, we are acting earlier in the signaling cascade to reduce inflammation Show my figure from my slides. Fish oils and algal oils containing EPA and DHA are known to reduce ARA—could they be applied to the skin to reduce inflammation? Possibly, but the starting sources are either fishy, or easily oxidized (because of the presence of 5-6 double bonds). Once a fatty acid becomes oxidized, a rancid odor is generated. Evening primrose oil (EPO) and borage oil have been used to treat a variety of skin conditions (eczema, psoriasis, acne) for many years now. It was commercialized in the 1980s by the company Efamol. It contains the fatty acids gammalinolenic acid (GLA), which is converted to the anti-inflammatory PGE1 molecule (via dihommogammalinolenic acid, DGLA). Unfortunately, regulatory authorities who reviewed the published evidence of efficacy found EPO to be mostly a snake oil story (Reference).

The fatty acids GLA, EPA, and DHA all work by reducing levels of ARA, and forming less inflammatory eicosanoids or possibly an anti-inflammatory eicosanoid in the case of GLA. All these common fatty acids reduce the arachidonic acid levels from phospholipid (membrane) lipids. The most abundant sources of phospholipids are phosphatidylcholine (PC), phosphatidylethanolamine (PE), phosphatidylserine (PS), and phosphatidylinositol (PI). GLA, EPA, and DHA all reduce levels of ARA from the PC, PE, and PS pools, but not the PI pool. The PI pool is actually a minor lipid pool, representing only about 3% of total phospholipids in membranes. Thus, it is quantitatively unimportant, so why should we care about it? PI and its phosphorylated derivatives (PIP, PIP2, etc.) are super important signaling molecules affecting a plethora of biological pathways, including inflammation.

In traditional Chinese Medicine (TCM), and in native tribes, they were consuming very specific gymnosperm (conifer) seeds and their oils orally, and likely topically, for thousands of years.  Well before that, ancient herbivorous dinosaurs consumed conifer species rich in sciadonic acid, based on several lines of evidence. Source. Potent anti-inflammatory properties were reported in the ethnobotanical, ethnobiological, and TCM literature for these seed sources. Upon analysis of these seeds beginning during my Ph. D thesis research beginning in 1988, I discovered that the seeds contained a fatty acid known as sciadonic acid (named after an abundant conifer species, Sciadipitys verticallata). Over the next 30 years, we and many others investigated the anti-inflammatory properties of sciadonic acid (now coined Delta-5 because the first double bond is at the fifth position from the carboxyl end of the molecule in a non-methylene interrupted double bond arrangement relative to the other double bonds) in a variety of model systems. In model systems and skin models, we observed a potent reduction in pro-inflammatory eicosanoids and reductions in inflammation (as backed up by testimonial data on SciaEssentials.com). 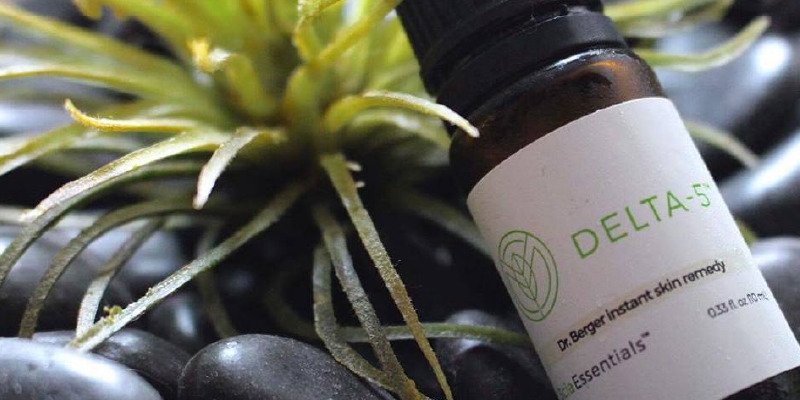 So, what makes Delta-5 sciadonic special, relative to the other fatty acid, such as EPA and DHA: