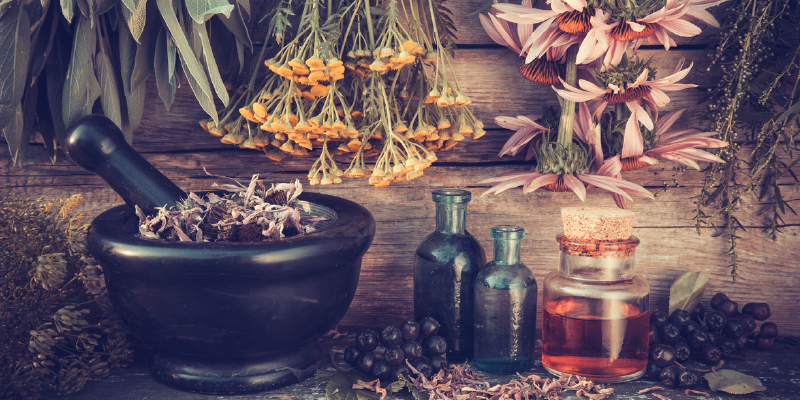 During the years of the Great Depression (1930’s), most people didn’t have a whole lot of money to go around. They were scrimping and saving just so they could afford to purchase flour to make bread. Things like medicine were a luxury, and makeup was only a distant pipe dream for the vast majority of women.

Money was in incredibly short supply thanks, in short, to the stock market crash of 1929 and the resultant run on the banks, causing 9,000 of them to fail. Jobs were scarce. Food was scarce. Money was scarce. People learned to master the art of frugality. Free and cheap were common themes.

Those with imagination and drive survived. Your great-grandparents survived on grit, spirit, and will. Creativity saw people turning to natural remedies and treatments for what ailed them or bothered them, since Necessity really was the Mother of Invention.

Women were still held to high standards in regards to maintaining their beauty and appearance, and they invented ways to copy the movie stars as best they could.

Many of their hacks dried up and withered away with the dust. Some for good reason. There were some pretty scary beauty inventions in the early 20th century! Some timeless traditions have carried on, passed down through the generations. Just what makes these skin care gems so tenacious through the decades?

Witch Hazel for What Ails Your Skin 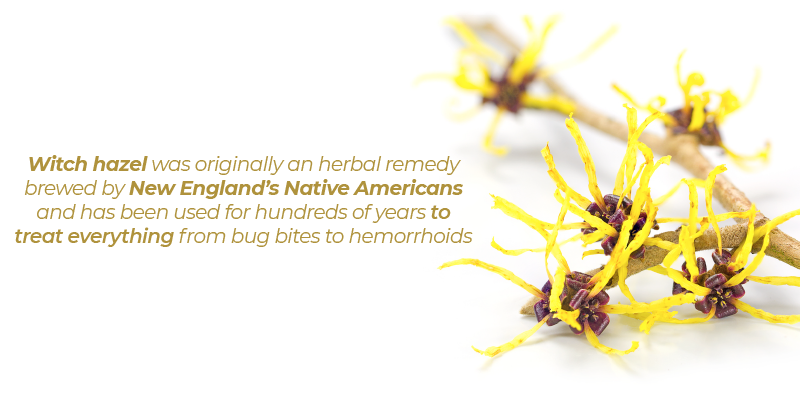 Witch hazel was originally an herbal remedy brewed by New England’s Native Americans and has been used for hundreds of years to treat everything from bug bites to hemorrhoids. The practice of distilling it was passed down through the early settlers. The E.E. Dickinson Company began selling the clear liquid as a tonic for almost all ills back in 1866, and still produces nearly all the witch hazel used throughout the world. At its peak, the witch hazel industry had dozens of brands competing for customers. What most didn’t know at the time was that many of the brands were all made by Dickinson.

In the 1930’s it was used in tonsorial parlors (barber shops) across the globe to soothe faces after removal of the steam towel. It was sold as a remedy for blisters, burns, backaches, earaches, hemorrhoids, pinkeye, internal bleeding, and wrinkles. It seemed to be the cure-all for whatever ailed you.

As women sought beauty star glamor on a wheat penny budget, tonics, or facial astringents, were used after cleansing cream to ensure that all of the cream was removed. Today, adding a toner to your routine can help to make sure that anything remaining on your skin following cleansing is removed. It’s also refreshing!

The anti inflammatory aspect of a toner helps to slow down the aging process and witch hazel has been shown to provide a myriad of other benefits, including reducing blisters, insect bites, poison ivy, and other inflammation. Our bodies deal with an abundance of stress every day, showing up on our skin as inflammation, puffiness, and sensitivities. Witch hazel’s antioxidant abilities help to curb that. It’s been used for generations as an under eye treatment to reduce puffiness. Just dab a bit under each eye with a cotton ball, being careful not to get it into your eyes.

It’s astringent, killing bacteria, so it’s one of the most effective natural acne treatments available.

Your great grandma probably still keeps a bottle of Dickinson’s witch hazel in her medicine cabinet. Popular products like Ponds and Tucks incorporate it. Skin care producers looking to fall back towards more naturally-proven ingredients, are noting the benefits of utilizing witch hazel in their products. 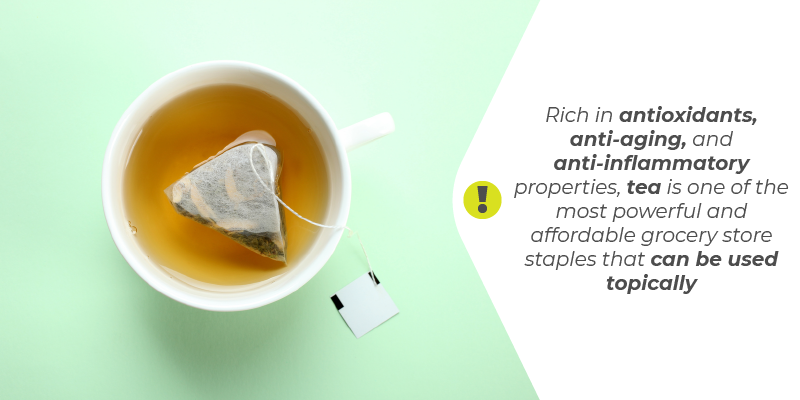 Rich in antioxidants, anti-aging, and anti-inflammatory properties, tea is one of the most powerful and affordable grocery store staples that can be used topically. Tea has numerous benefits for your skin and overall health.

Your great grandmother knows that the caffeine in tea helps to calm puffy eyes. “The caffeine in the tea bags helps with vasoconstriction, or shrinking of the blood vessels, around the eyes, leading to less puffiness or swelling skin,” says dermatologist Purvisha Patel, MD, creator of Visha Skin Care. Simply wring out wet tea bags and place them in the fridge for a bit. Use them to cover your eyes to decrease inflammation and swelling.

Green tea can help to draw out impurities, reducing the appearance of pores, and give you a healthy glow. Spritz cool green tea or apply it with a cotton ball twice daily.

Some studies have shown that the caffeine in tea applied topically can also act as sunscreen and help to prevent skin cancer. Cold compresses made of tea bags can help to relieve pain and reduce the redness of a sunburn. 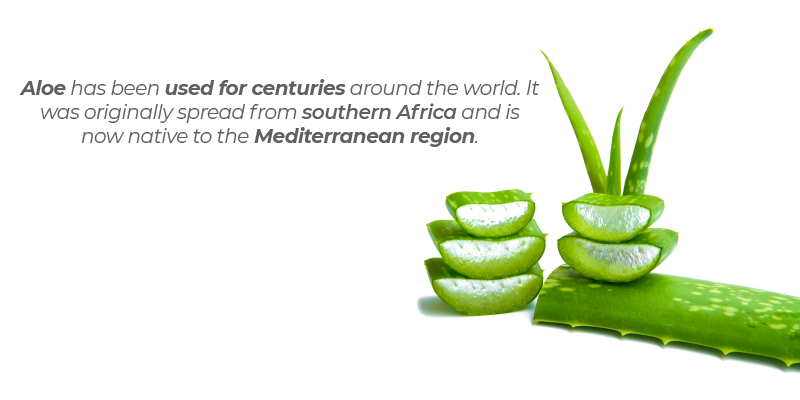 Aloe has been used for centuries around the world. It was originally spread from southern Africa and is now native to the Mediterranean region. According to the Food and Drug Administration, Spanish visitors are believed to have brought it to the West Indies. Ancient Egyptians called aloe vera “the Blood of the Gods,” and used it to fight many diseases, fix ailments within the intestinal tract, and protect their skin.

The earliest medical references for the use of aloe vera gel were in the 1930’s when research showed it was an effective treatment for radiation burns. It’s been found to contain a compound that helps to relieve pain. Interest in the plant’s healing powers continued to grow from there.

It contains ingredients that are soothing and antibacterial, and can fight inflammation, redness and itching. Aloe has been found to fight fungal infections and remedy frostbite, psoriasis, and cold sores. It can detoxify your body, especially when taken internally.

And, of course, it’s the first product everyone reaches for to soothe their sunburn, but it’s also been proven to be effective for other types of burns, as well. “Aloe is a very soothing remedy for burns,” Dr. Patel says. “It is a gel derived from the aloe vera plant that contains anti inflammatory agents that can help with burns.” Make sure you use pure aloe and not a fragranced version, and test it first to make sure you’re not allergic. For serious burns, though, you should still see a doctor.