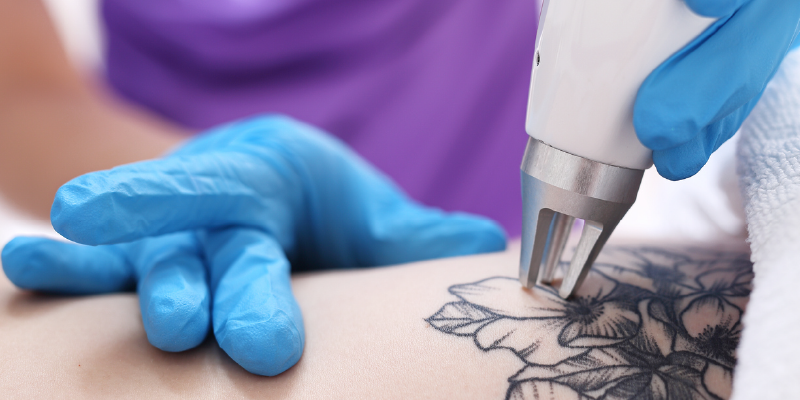 Tattoos. For many, they’re a rite of passage through their younger rebellious years. Or maybe a phase they were going through midlife. Some use the colorful artwork to show that they stand behind a cause or movement, only to find they change their viewpoint or mind later in life. For some, there is instant buyer’s remorse.

One physician specializing in tattoo removal estimates that about 50% of those who get tattoos later regret them.

Whatever your intention or reasoning was, you may be finding yourself on the verge of a decision to reverse the process and have that giant Harley-riding Granny with flames for eyeballs removed from your neck.

If you’ve done any research you’ve probably found multiple stories detailing the pain of a tattoo removal. One patient describes his pain in comparison to his original tattoo experience. “If I had to compare it directly to tattoo application, I’d say it hurts 1.5x – 2x more than the most painful application spot during my tattoo — my sternum.”

So let’s take a look at exactly what laser tattoo removal entails, and discuss what steps you can take to ease the pain of parting with your ink.

What Is a Tattoo?

Ink is implanted into the dermal layer of skin (underneath your outer epidermis) through a rapidly-moving needle that repeatedly punctures the epidermis, injecting ink below. The dermis is more stable than the outer epidermis, so a tattoo should last, essentially unchanged, for the rest of a person’s life. When you’re looking at a tattoo, the outer layer of skin is like a window; you’re looking through it to the ink beneath.

When you first got your tattoo, there was inflammation at the site in response to the punctures to your skin.

How Does Laser Tattoo Removal Work? 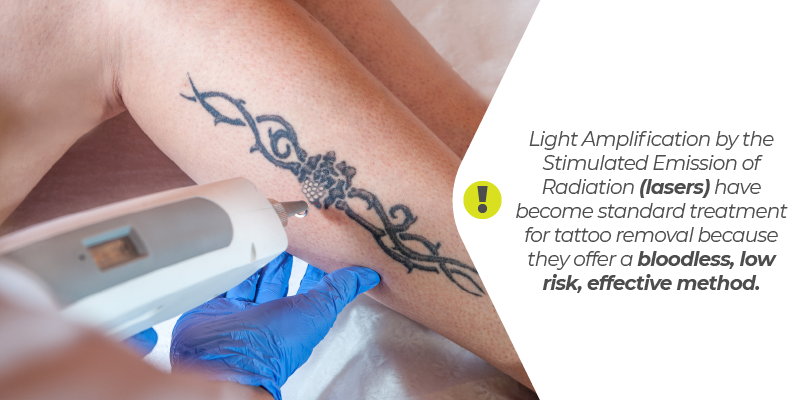 Light Amplification by the Stimulated Emission of Radiation (lasers) have become standard treatment for tattoo removal because they offer a bloodless, low risk, effective method. The procedure can be done on an outpatient basis in a single (for some) or series of visits.

Lasers produce short pulses of intense light that pass through the top layers of skin and are absorbed by the tattoo pigment. The lasers used are selected to run on wavelengths that will only target the tattoo’s pigment, not your own, so there’s no worry you’ll wind up with abnormally-colored skin. The energy from the laser causes the pigment to vibrate and then to shatter into smaller particles that can be scavenged and carried away by the body’s immune system. It’s the speed and heat of a laser that is crucial to cracking the ink particles apart, and the process is called photothermolysis.

Most people need multiple (between four and 10) sessions to break up a tattoo, depending upon the ink used. It takes a long time to complete the process, and each time you return, more pigment is broken up to be removed by your immune system.

There is an amount of pain involved in the procedure, though the amount varies depending upon who you talk to. Some describe the actual treatment as the snapping of a rubber band again and again, others describe the pain as near-unbearable, detailing an experience far worse than the initial tattoo process. Some describe the lingering sensation as similar to a burn or blister.

What Happens Between Tattoo Removal Sessions?

After treatment, the area may seem like a superficial burn wound. You may experience minor bleeding, redness, swelling, whitening of the area, bruising, and blistering. The next several weeks may see the treated area flaking, peeling, and scabbing.

This acute inflammation can be the most uncomfortable part of the process. You’ll notice by the Five Cardinal Signs of Inflammation:

Tattoo removal technicians and dermatologists recommend handling the site gently, avoiding sun exposure and public swimming pools. They also recommend applying a thin layer of healing ointment for a few days. In the event of blistering, they recommend protecting the area with an ointment for at least 24 hours after blisters have popped.

Perhaps the pain of removal is still worthwhile in the face of the pain caused by a regrettable tattoo.

But there are ways you may relieve the pain and speed healing between sessions. A soothing oil like DELTA-5® will not only keep the area moisturized and lubricated, but its mechanism of action shows it to be useful in helping to reduce the first four signs of inflammation: heat, redness, swelling, and pain. Preliminary studies verify this relief of symptoms when used in conjunction with related types of acute inflammation. By applying it two to three times daily, you may notice minimization of redness, swelling, and blistering.

Once the skin has completely healed (usually about four to six weeks later), you can move on to the next session. The faster you can heal and move forward, the sooner you can start to plan your next tat.